Join us for our first ever virtual Fall Gala on November 14th! While we wish we could celebrate with all of you in person, please join us online for an evening of fun, music, and giving. The evening will feature three BRAND NEW performances from our boys, video updates of what we have been doing at the AABC, a live auction, and a special presentation from this year’s Great American Honoree, Mark Schulman!

To purchase tickets to our virtual Fall Gala, please click on the following link or scan the QR code! 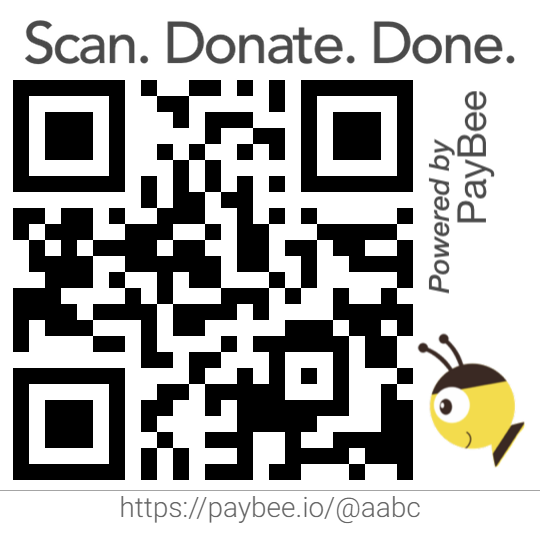 Over the last 8 months, the world has been rocked by the COVID-19 pandemic. Statistics show that the mental health of our nation’s children has been greatly affected. Loneliness, depression, and anxiety have been exasperated by the stay-at-home orders and the lack of social interaction. The AABC has worked tirelessly to continue to provide our acclaimed music education to our boys, and has led the way in SAFELY returning to in-person activities while also adhering to all local ordinances. Within five days of the official stay-at-home order being put into place, we shifted our entire program online, including rehearsals, music reading classes, and virtual choir performances.

As early as mid-July, the AABC held an in-person camp that was described by some boys as “the best thing I’ve done all year!” In early September, in order to address the lack of in-person instruction for our boys at school, we resumed in-person instruction in an outdoor setting. Additionally, we have been able to create many unique music video recording opportunities that have involved nearly every member of our Concert Chorus.

As we look to the future, we are excited about virtual events coming up this year, such as our virtual Fall Gala in just a couple weeks and our first ever virtual holiday concert in December, as well as to hopefully getting back to a more normal schedule of events next year with perhaps in-person concerts and a summer tour of the western United States! It will be wonderful to reintroduce our choristers to live audiences and performance opportunities once it is safe to do so.

Meet this year’s AABC Fall Gala Great American Honoree, Mark Schulman! Mark has enjoyed an unprecedented career over the last 32 years as a first call drummer for world-class rock and pop artists. He was voted ‘Top 3 Pop-Rock Drummers’ in the Modern Drummer Reader’s Poll in 2014 and was the featured cover artist in the May 2019 issue of Modern Drummer. Mark has done four record breaking world tours with P!NK and continues to work with her after 14 years.

Mark’s resume reads like a “Who’s Who” of international Rock n’ Roll royalty, including acts such as CHER, BILLY IDOL, FOREIGNER, SHERYL CROW, STEVIE NICKS, BEYONCÉ and so many other world-class artists. He has drummed with VELVET REVOLVER at Ozzfest and for a crowd of 225,000 at Glastonbury Festival with SIMPLE MINDS. Mark has appeared on nearly every American, European and Australian variety show including The Grammys, David Letterman, The Tonight Show, Conan O’Brian, Jon Stewart, American Idol, Paul O’ Grady, X-Factor, Wetten Das, The Arias and more.

Mark’s first book ‘Conquering Life’s Stage Fright’ shows people in all industries how to harness doubt, fear and anxiety as it relates to any performance or presentation and transform that into clarity, capability and confidence. His book can be found on Amazon.com and at Guitar Center.

Mark now spends a great deal of his time as an international corporate speaker for clients such as American Express, Microsoft, IBM, DELL, Cisco, Aveda, Kaiser, NCAA, SAP and more. As a celebrity speaker, Mark provides three simple concepts to boost attitude and performance for all attendees through compelling stories about working with world class artists like PINK, Billy Idol, and Cher, drumming performances with video, and high energy audience interaction. To date, Mark has performed over 1500 music seminars and public speaking gigs and has performed for over a billion people in his career!

Music is not Mark’s only driving force. He was the chairman of the board of directors of Create Now!, a non-profit organization founded in 1996, to help change troubled children’s lives through creative arts mentoring. A cancer survivor himself, Mark has also motivated children and teens through his work doing seminars with the RONALD McDONALD HOUSE and benefits for the TEENAGE CANCER TRUST in the UK.