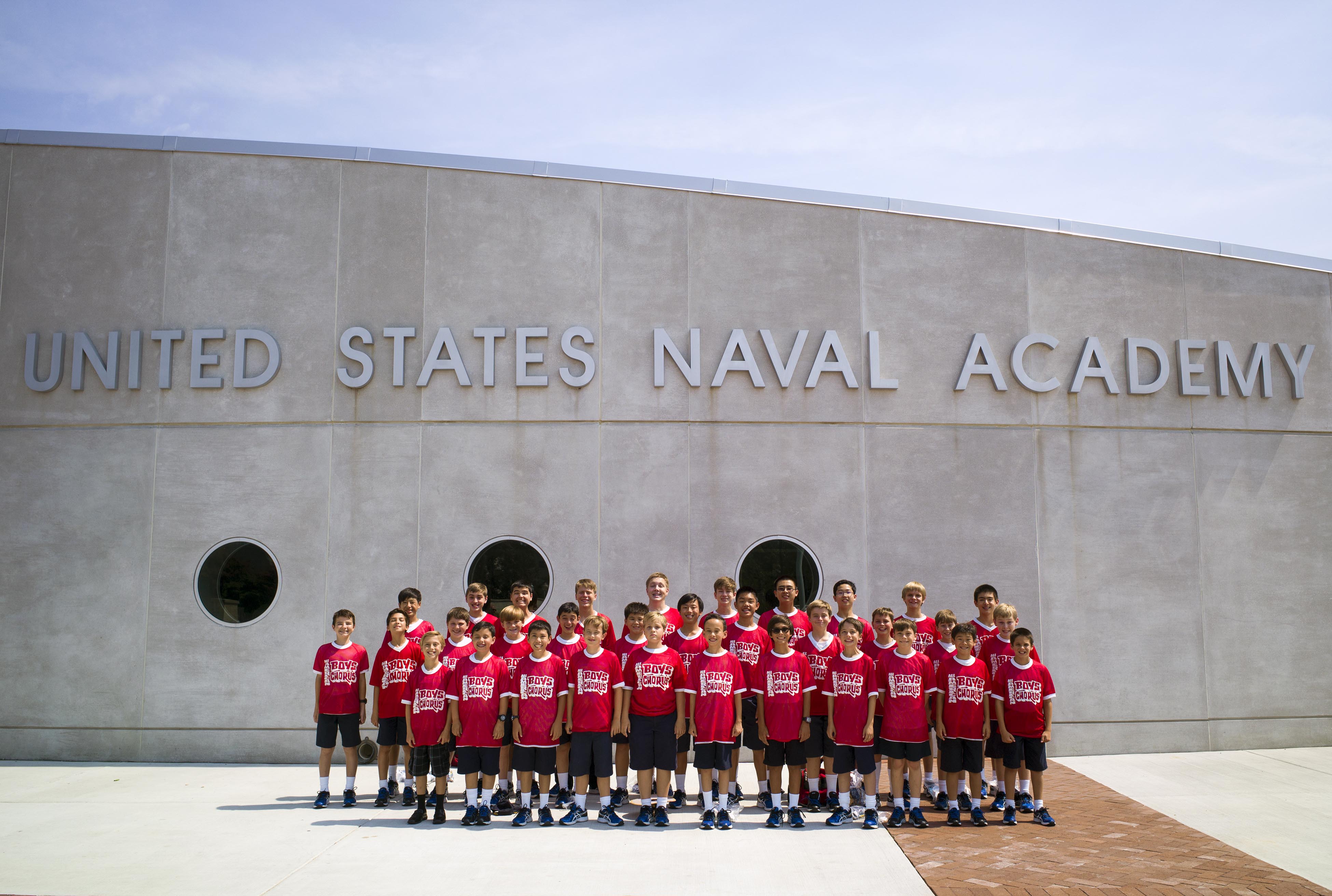 Sunday dawned bright and hot and humid again, but by now we’re used to the weather (for the most part).

Off we headed to the U.S. Naval Academy located in Annapolis, Maryland.

When we arrived we were met by two guides, so we split the boys into altos and sopranos and each group (accompanied by four staff members) headed off with a guide to explore this vaunted and historic campus.

The great seal of the Navy.

The main barracks.  It has it’s own zip code!

The Academy Chapel.   Our guides told us that they had secured permission for the boy to sing one or two songs in the chapel.

In the chapel is the sarcaphogus of John Paul Jones.  His remains were lost for a while in France and then discovered and brought to the United States and placed in this beautiful chamber.

The boys sang “America” and (you guessed it) “Anchors Aweigh!”

After the singing, a quick picture in “photo ranks.”

We had lunch at the Academy and then of course there was the obligatory visit to the gift shop.

Next, we were off to the International Spy Museum.  It was a big hit with the boys, but everything inside is top secret so there are no photos.  However, while we were outside the museum we took photos of the boys with their respective staff members for the “walking around” groups.

Then we headed to the Washington Monument for an early evening ascent to the top; from which there are awesome views of the national mall and the city.

The good old telephoto lens come in handy at times like these.

After our descent, the boys expended some energy by running around the base of this amazing monument!

As we waited for the bus to pick us up we had a last view of the Washington Monument in the dusk.

Sleep-time approaches.  What a great day!

Monday morning we awoke to the possibility of rain with scattered thunderstorms.  Not a good forecast for our day at George Washington’s Mount Vernon.

Nevertheless we headed out after breakfast to the storied estate on the banks of the Potomac.  Upon our arrival we were greeted by friendly staff members and we viewed an introductory “greeting” from Pat Sajak, followed by a more substantial movie about the terrible winter at Valley Forge during the American Revolution.

While we waited for our guides we wandered about a little.

Checking out the scenery

Hanging out with one of the “re-enacters”

We toured the various buildings, including the blacksmith shop, slave quarters and kitchen.  Then we went into the home itself (no photos allowed).  The restoration work has been extensive and it was truly like stepping into the late 1700’s.

The last part of the tour was a visit to General Washington’s grave, and the boys were asked to sing.  We sang America the Beautiful, and then two boys carried a wreath and placed it next to the grave.

This was followed by the Pledge of Allegiance and a reading of General Washington’s prayer.

We had lunch at the estate and then spent time in the museum and, of course, the gift shop.

A truly lovely and edifying visit to the beautiful home of our nation’s first president.

Back to the bus and we were on our way back to Washington DC to visit the Newseum, something fairly new in terms of the various sites in the capital.

Inside there was were many (and fascinating) displays and exhibits about “news” and how it was covered, how it affected events and trends, and how the reporting of the news has evolved over time.

In the Newseum we saw a part of the Berlin Wall.

Quite a neat place to visit; and we wished we had allowed more time to see everything.

We returned to our hotel to collect our laundry and while some staff did the laundry the boys and other staff members ate dinner at a local restaurant.

Time for sleep.  Tomorrow is our concert at the John F. Kennedy Center for the Performing Arts!