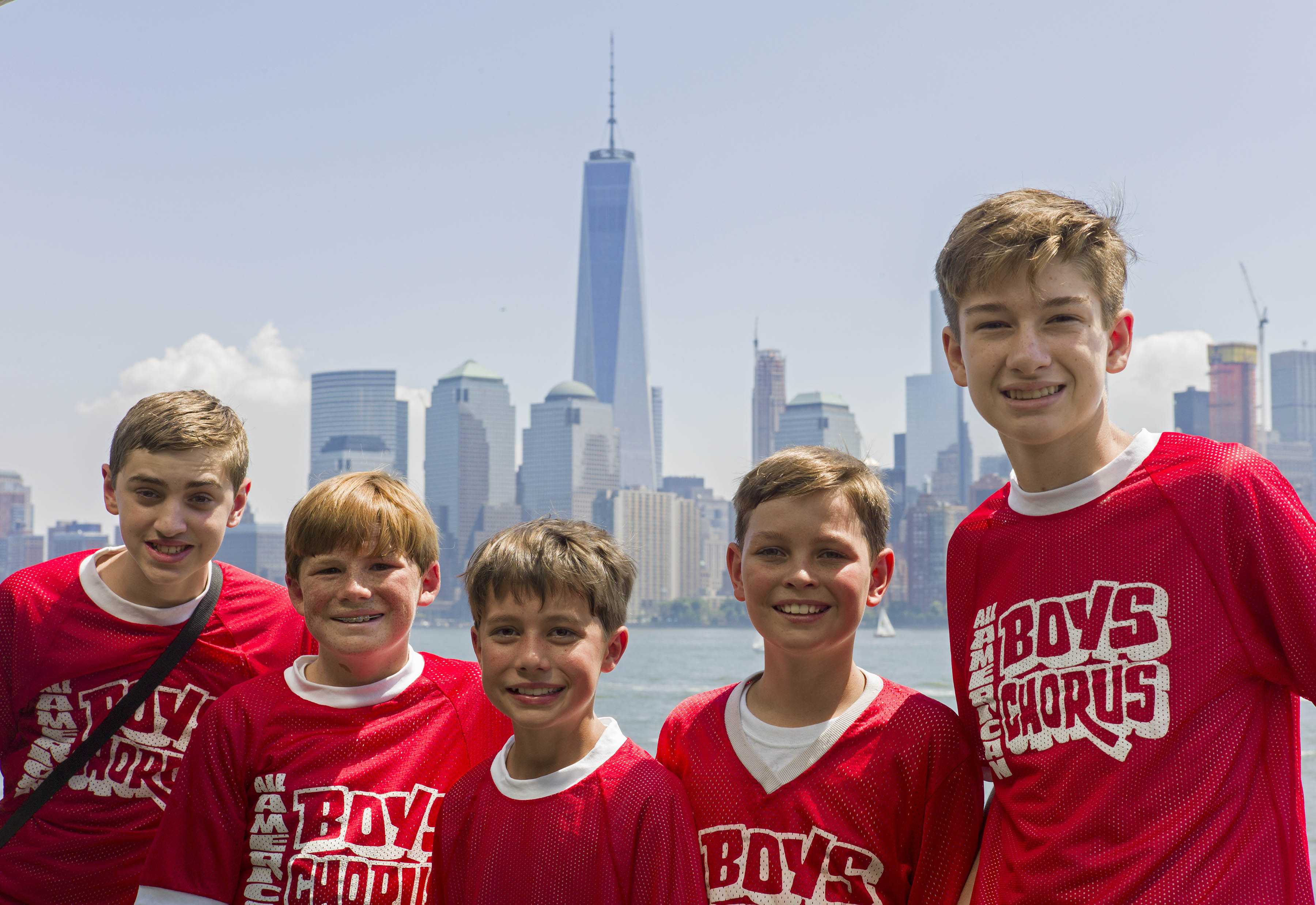 We began our first “official” day in New York with a trip to the Liberty Park landing to catch the Statue of Liberty ferry.

The heat and humidity were intense!

At last!  We’re on the boat and heading to Ellis Island.  Lots of people!

The New York skyline is quite impressive!

The Statue serves as a perfect backdrop.

We toured the main building on Ellis Island where millions of immigrants passed through on their way to their new lives in the United States of America.  The exhibits were excellent, in spite of the damage inflicted by hurricane Sandy a few years ago.  On to Liberty Island – and lunch!

Refreshed and re-charged we headed to the Statue of Liberty.  We went up to the pedestal – 196 steps!  And then we headed back down and everyone fanned out for photos.

Then a final group shot with the New York skyline as the backdrop.

We took the ferry to Battery Park, which is in Manhattan, and took our first ride on the NYC subway!

We arrived in Central Park and had a brief walk (it was still very hot and humid!).  There were lots of people out as it was a Sunday evening.  We saw the tribute to John Lennon.

Then we headed to Times Square and dinner at Olive Garden.  The manager did a fantastic job getting us all into his very crowded establishment.  It’s amazing what a chair, air conditioning and some food can do to revitalize a person!

After dinner everyone was raring to get out and see a bit of Times Square by night!  (photos coming).  New York lives up to all of its claims, and “the city that never sleeps” is certainly one of them!

It was a very tired, but happy, bunch that took the subway and PATH back to the Jersey shore to meet up with Paco and the bus and return to our nice little hotel.  What a day!

Tomorrow it’s the 9/11 Memorial and our concert at the iconic St. Patrick’s Cathedral, and the Empire State Building.

Our 2nd Day in New York dawned just as warm and humid as our first day.  After breakfast at our lodgings, we headed into lower Manhattan to the 9/11 Memorial.  Navigating the busy traffic on our bus took a lot of skill on Paco’s part and a good eye on Google maps from our “navigators” (Pierre and Youssef).

We arrived at the designated drop-off point and headed to the memorial.

It was a moving and somber visit.  The 9/11 Memorial is very well planned and superbly presented – using images, video, audio and interactive displays.  All of us, boys and staff members, found it to be a sad but also inspiring experience.

After exiting the memorial the boys pondered the reflecting pools inscribed with the names of the victims on the wall surrounding each pool.

Then they gathered for a group shot . . . and, at the request of some of the people visiting the memorial, they sang two songs.

Lunch was in a nearby food court; and what a food court it was!  All types of food in a giant pavilion, in which there were probably 1,000 people.  Another “New York” experience!

Then it was on to St. Patrick’s Cathedral to prepare for our concert.

The boys waited and vocalized in a nearby public atrium (beautifully air-conditioned!) and then headed across to the cathedral for the performance.

The cathedral is currently undergoing some significant interior renovations.  But it’s still massively impressive and there were many people inside looking at the various artwork and stained glass windows.

At exactly 4:00 pm, the boys walked into the sanctuary and began their concert.

As you can see there was scaffolding on the sides, but the high altar and baldachin behind them were magnificent.

After the concert the boys reconfigured into “photo ranks” for a group shot.

The first visit to New York by the All-American Boys Chorus and the first concert in the city took place in one of its most famous landmarks.

After the concert, the boys met the audience, which included quite a few parents and relatives.

Then it was off to the New York Athletic Club for a lovely dinner hosted by Mr. Tom Courtney (grandfather of one of our choristers and an Olympic Gold Medalist in the 1956 Summer Olympics held in Melbourne, Australia).  Mr. Courtney gave us a super tour of the famed club, showing the boys the pool and indoor running track, as well as the Hall of Fame that contained the photos of the various members who were Olympic medalists.  What a neat experience!

Then it was back onto the subway for a quick ride to the Empire State Building, which was the finale of our visit to New York.  It was crowded and it took a while to get to the top.  But it was a clear night and . . .

we took this view with us back to our hotel.

Our stay in New York was exciting, warm, magical, inspiring, tiring and fun!